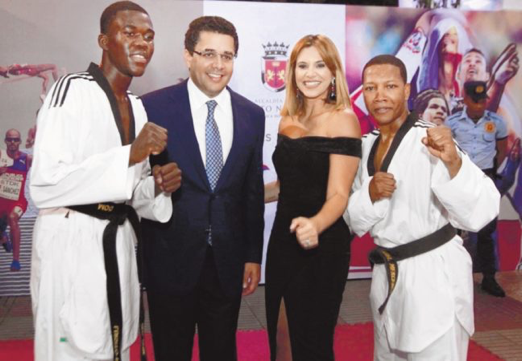 The key Dominican athletes were put on display as part of an exhibit hosted by the Mayor of the National District, David Collado, at the Town Hall and Parque Colón of the Colonial City.

The exhibit is composed of photos taken from the book “GLORIES: Going for the Gold” and the institutional agenda “The Inclusion Games,” which were edited by INICIA on occasion of the 70th anniversary of the Dominican Olympic Committee.

“We want all tourists and residents visiting our Colonial City to learn about our Olympians, which have made our nation proud and honorably defend their flag in the competitions for which they represent the country,” said Collado during the opening address that formally inaugurated the exhibit, an event that featured the presence of Sports Minister Danilo Díaz, the chairman of the Dominican Olympic Committee (COD), Luisín Mejía, and the Managing Partner of INICIA and Chairman of CRESO, Felipe Vicini.

During his speech, Vicini highlighted the arduous efforts made by the firm he chairs through CRESO. “This program, founded over 5 years ago, invests directly in the academic and sports development of 78 athletes. We have triumphantly participated in two Olympic Games: London 2012 and Rio 2016, and we are already working towards giving it our all at Tokyo 2020,” expressed Vicini.

During the activity, Vicini invited other businesses to join CRESO through sponsorship, and he seized the occasion to distinguish José Joaquín Puello for his efforts in running for chair of ODEPA.

Once the expo was inaugurated, the attendees witnessed a Tae Kwon Do demo match starring Gabriel Mercedes, one of the Pekin 2008 medalists, and Luisito Pie, bronze medal winner in Rio 2016. The photography expo will be open to the public all throughout May, and as announced, INICIA will also present the photo exhibit at the Inter-American Development Bank, as part of the activities program for Dominican Week in the U.S, organized by the American Chamber of Commerce of the Dominican Republic. During the event Luisín Mejía, President of the COD, highlighted the recognition made by the Mayor of Santo Domingo to the national Olympic athletes. “We feel immensely joyful, because the main national authorities are rendering tribute to our athletes. Today, it is the Mayor of Santo Domingo, represented by David Collado,” Mejía said as he expressed how this activity further commits him to continue working in favor of sports and Dominican youths.

“Thanks to David Collado, once again to Felipe Vicini, Chairman of the Board of CRESO,” he said. The activity featured the presence of several personalities of the national public service, among them Dr. Milton Ray Guevara, chairman of the Constitutional Court; Sports Minister Danilo Díaz; the COD chairman, Luisin Mejía; Dr. José Joaquín Puello, chairman Ad Vitam of the COD; Franklín León, president of the National Brewery; Gilberto García, chairman of the Judo Federation; Miguel Rivera of the Handball Federation, among others.