“I Hope the Escogido Gets Us the 20th Crown” 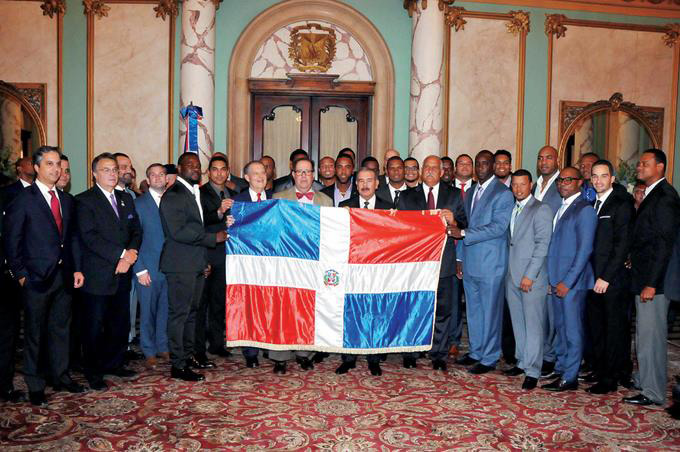 President Medina said to the managing committee and players with sights set on winning the Caribbean Series, which opens on Monday.

President Danilo Medina encouraged the Leones del Escogido to win the 20th Crown for the Dominicans in the Caribbean Series, which opens next Monday in the Estadio Quisqueya Juan Marichal.

“Let’s crown the D.R. with this 20th championship, and that responsibility falls on you” the president exhorted the Escogido Manager, Luis Rojas, during the reception hosted for the team in the Ambassadors Hall of the National Palace.

“However, there is a second responsibility over your shoulders, and that is that the Caribbean Series with the Dominican Republic as host country is 5-4, so, DON’T Let a tie take place.”

“It is a great pleasure to deliver the national flag to the champion team the Leones del Escogido, now Dominican Republic; the aim is for this flag to continue waving high”, said Medina a quiet follower of the capital-based team.

Previously, the LIDOM chairman, Leonardo Matos Berrido, delivered to President Medina a T-shirt with the #1 and his name on his back, similar to the one he will wear in the Quisqueyan representation at the event, which is to gather his peers from Puerto Rico, Venezuela, Mexico and Cuba.

Matos Berrido thanked the President for having responded to the petition made to refurbish the old stadium, now the soon to be host of the Caribbean Series, and also host to the World Baseball Championship next year, as well as off-season games and to campaign in the Major League franchises.