Felipe Vicini: “It is our duty to shape the leaders of the future, along with their education” 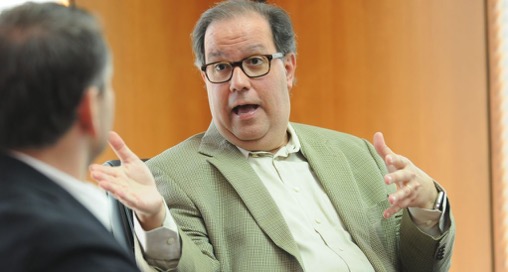 Santo Domingo, D.R. – Felipe Vicini Lluberes, entrepreneur and Chair of CRESO, pondered the importance of the private sector in developing Sports in the Dominican Republic. He also congratulated Multimedios del Caribe, CDN, and CDN Deportes for their efforts in organizing the Sports Summit.

“I’d dare say that Sports will be played, and develop without the engagement of the private sector, but, the private sector can indeed push it forward, from a national to an Olympic level. When Eduardo went all in for the Federation and the national Basketball team, through Ferquido’s sponsorship, that helped a lot.

We also contribute. It is important for the private sector to have its space, it is important that it support amateur, and professional sports”, Vicini said.

Vicini said that Creso foresaw, after the Beijing Olympic Games, that athletes required the backing to attend international events, as well as the future of those athletes, after their retirement from their discipline.

“In the past, many of these athletes, were left to their own devices, and in dire situations. In CRESO, we believe we can help these athletes overcome such a stage in their lives. It is our duty to shape tomorrow’s leaders, along with their education. Athletes are natural-born leaders, and this country needs leaders. Some of the athletes that have completed the program, are already self-made entrepreneurs”, Vicini added.

About Felipe Vicini:
Felipe Vicini Lluberes is a Dominican entrepreneur, Managing Partner of INICIA, an asset management firm based in Santo Domingo and whose operations are focused on the NOLA region.

He graduated from Northwestern University, in Illinois. We worked in the film industry since the age of 16, where he became producer, and director, returning later to the Dominican Republic, to begin his entrepreneurial career.

Likewise, Vicini is Chairman of CRESO, a not-for-profit entity, which invests in the education and athletic training of the high-performance athletes of the Dominican Republic, is also member of the BARNA Board of Regents, as well as other non-profit organizations.

Tweets by @FelipeVicini
PrevPreviousOlympic Athletes will be checked for COVID-19 symptoms in CEDIMAT
NextFelipe Vicini: “Through CRESO, we seek tomorrow’s leaders exemplary leaders of the Dominican Republic”Next
Scroll to Top