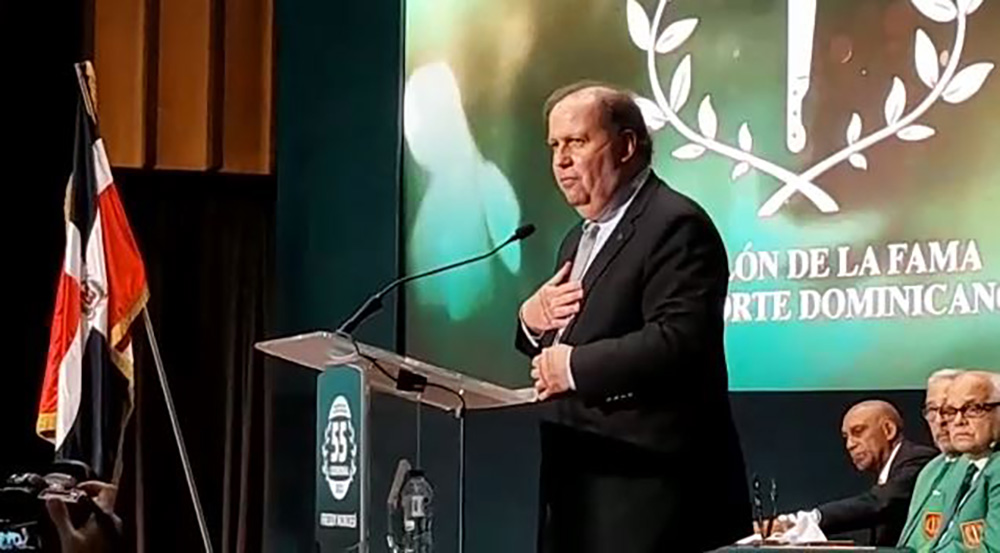 Santo Domingo, DR – Businessman Felipe Vicini receives an award on behalf of the Creando Sueños Olímpicos (CRESO) program at the 55th Ceremony of the Dominican Sports Hall of Fame.

Upon receiving the award, he emphasized that “behind this recognition are the ten companies and businessmen who are members of CRESO”.

In this sense, he expressed that he feels very proud because he carries out his work for the athletes.

Felipe Vicini Lluberes, businessman and chairman of Creando Sueños Olímpicos (CRESO), praised the importance of the private sector in the development of Dominican sports.

During an interview in December last year, he congratulated Multimedios del Caribe, CDN and CDN Deportes for organizing the Sports Summit.

He said that CRESO found, after the Beijing Games, that athletes needed support to go to international events. He wondered what was going to happen to those athletes after they retired.

“Many of them, in the past, fell into oblivion and hardship. At CRESO, we believe we can help athletes at that stage, after retirement. It is our duty to create the leaders of the future, hand in hand with education. Athletes are natural leaders; this country needs leaders. Some of the athletes who have left the program are now entrepreneurs,” he added.

He explained this in an interview conducted by Yancen Pujols, sports editor of El Caribe newspaper.

Felipe Vicini Lluberes is a Dominican businessman and Managing Partner of INICIA, an asset management firm based in Santo Domingo, whose operations are focused on the North of Latin America (NoLA) region market.

He completed his undergraduate studies at Northwestern University, Illinois, USA. He worked in the film industry since the age of 16, becoming a film producer and director, returning later to the Dominican Republic, where he began his entrepreneurial career.

In addition to his entrepreneurial activities, Vicini is the chairman of Creando Sueños Olímpicos (CRESO), a not-for-profit organization that invests in the education and preparation for sports of high-performance athletes in the Dominican Republic. He is also a member of the BARNA Board of Trustees, as well as other non-profit organizations.