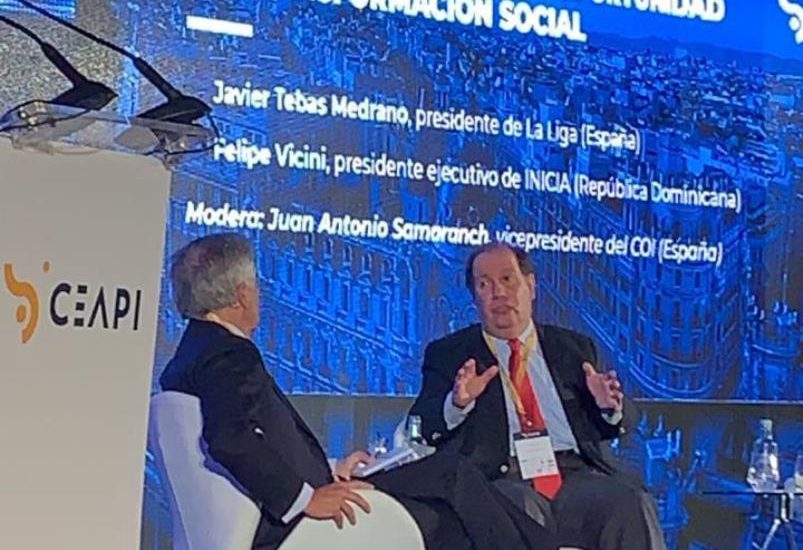 EL NUEVO DIARIO, MADRID.- Felipe Vicini, CRESO Chairman, elaborated on the CRESO model to the Ibero-American business sector, which he invited to invests in sports as one of the pipelines that will help promote social development and the future leader generations.

Vicini disserted during the “Business and Sports” panel, where he was interviewed by Juan Antonio Samaranch, VP of the International Olympic Committee, and whom co-moderated the panel with Xavier Tebas, Chairman of the Spanish League.

“Today, in our country, we have athletes that became leaders and got their college degree, and are becoming active members of the Dominican labor market, which on the long-term will drive valuable impact nationwide”, Vicini expressed, whom set the examples of athletes Félix Sánchez, Yamilet Peña, Gabriel Mercedes, among others, as role models. VIcini stressed that one of the differentiating components asides CRESO, has been the mentorship offered to the athletes.

“This has been a powerful impact to the athletes, whom we sponsor not only with resources, but also with our guidance; we attend their competitions, and that gives them a sense of belonging and of important self-worth” the businessman expressed.

The panel in which Vicini -Managing Partner of the firm INICIA in Dominican Republic-  spoke, took place within the framework of the Consejo Empresarial de Alianza por Iberoamerica (*in English: Corporate Partnerships for Ibero-America Council) -CEAPI-, which is THE most important business forum of the Spanish-speaking world.

Tweets by @FelipeVicini
PrevPreviousDR preselection baseball team is asked “for a win” in the Pan-American games
NextVicini: “There Will Be Changes In Odecabe”Next
Scroll to Top