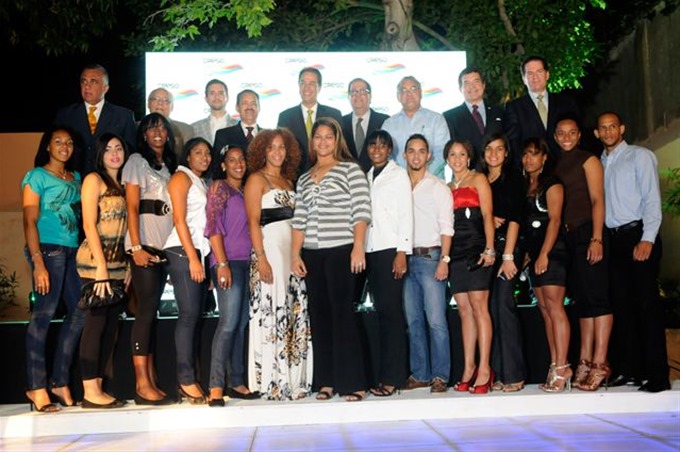 Dominican sports have just hit the jackpot; the support obtained by a reputed pool of businesses, which have merged in an entity called “Creando Sueños Olímpicos, known by the initials CRESO, due to the initiative of Mr. Felipe Vicini, executive president of VICINI.

Amid an event celebrated last night in the colonial zone, Vicini issued a vehement calling to the Dominican entrepreneurial sector to join in on the initiative, which pursues to provide facilities to high-performance Dominican athletes. To the calling made by VICINI, companies that have joined CRESO include: Grupo Corripio, Mercasid, Central Romana Corporation, Ferquido, Banco Popular and Claro-Codetel.

During his speech, Vicini narrated how the project began in 2009, emphasizing that alongside the Dominican Olympic Committee (COD), the initiative “had as main objective an investment agreement, on behalf of VICINI, on the high-performance sports platform”. “This agreement consisted in supporting athletes with the purpose of creating an economic independence that would allow them to consecrate themselves to their sports practice, at the same time they are able to obtain academic formation”.

“CRESO invests resources that work as an additional guarantee to the official government budget and not a substitution”, Vicini continued expressing while pointing out that one of the aims is to “develop and promote an increase and constant, as well as programmed support of all sectors involved in sports”. The program also promotes sports, educational and social development, so that in the long-term we can create model leaders, which become model citizens, formed with levels of excellence, worthy workers, and committed to their country. VICINI informed that CRESO invests resources in the disciplines of: boxing, sailing, fencing, taekwondo, track, basketball and weight lifting; and contemplates involving tennis, Ping-Pong (table tennis) and Olympic wrestling.

Vicini emphasized the role played by CRESO in the preparation and participation of Dominican athletes that attended the Pan American Games of Guadalajara, where the Dominican Republic won 33 medals, exceeding their previous performance in the Rio Games, where the DR won 29 medals. He thanked the athletes, to whom he said “every day you exalt the name of our nation, filling us with great emotion, pride and satisfaction”. He also extended his thanks to all businessmen who have joined CRESO, as well as COD and the technical direction of this organization that has been working alongside the program.

Vicini pointed out that “efforts like these are priceless contributions and for the long-term, a legacy we leave our country; since we are contributing towards a better society so our industrious spirit be guided on the pathway to a professional formation that is worthy and an example to follow here as well as abroad”.  With emotion he said that now “the goal is London 2012 and then Rio 2016”. “It is an effort for the long-term”, said Vicini upon finalizing his speech, whom was joined by Marcial Najri, of Ferquido; José Mármol, of Banco Popular; Freddy Domínguez, of Claro-Codetel; Julio Brache of Grupo Rica; Manuel Corripio, of Grupo Corripio; Roberto Bonetti, of Mercasid; and Frank Micheli, of Central Romana Corporation.

At the act, also spoke Luisín Mejía, President of the COD, whom graded the official program launch as a “historical milestone”, highlighting the outreach CRESO has generated in high-performance competing athletes. “This is the backbone we need, added Mejía obviously feeling emotional, whom shortly after presented a video with thrilling moments capturing Dominican participation in the Guadalajara Games. Of the 33 medals reached in Guadalajara, CRESO was present in 27 of them.

Yuderkis Contreras, two-time Pan American champion of the 53kg category in weight lifting, spoke on behalf of the athletes, highlighting that the scope of the program has allowed her to begin her university studies. “I always wanted to study and thanks to this scholarship offered by CRESO, I am already majoring in Accounting, a career that will allow me to be a professional, when I am no longer able to practice my discipline” said the renowned athlete.

Contreras pointed out “as an athlete, I feel proud of my country, I compete for my flag, and I feel very happy that Dominican businessmen are supporting us to reach our dreams, and assist us in becoming good professionals”.