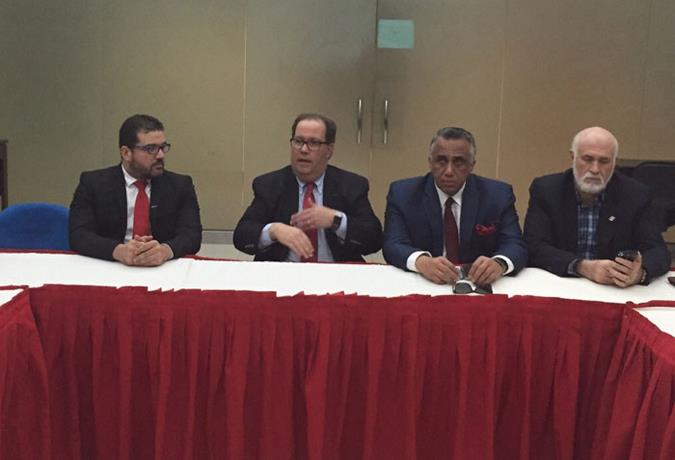 Mr. Felipe Vicini, along with Luisín Mejía, Armando Soldevila, new Executive Director of CRESO and Antonio Acosta, during the presentation of Soldevila in his functions in the body.

The program Creando Sueños Olímpicos (CRESO) announced the appointment of Armando Soldevila as the new executive director of that organization during an event held at the headquarters of the Dominican Olympic Committee.

The meeting was chaired by Mr. Felipe Vicini, president of CRESO, along with Luis Mejía Oviedo and Antonio Acosta, president and secretary general of the Dominican Olympic Committee, and also attended by the presidents of the 15 sports federations supported by the program.

The announcement was made by the president of CRESO, Felipe Vicini, who indicated that the designation was made with the aim of dynamizing the organization and bringing athletes and federations closer to the program.

Mejía Oviedo said that this new stage is a long-term challenge for both COD, federations and CRESO itself.

The designation of the new executive director of the institution is part of CRESO’s plan to strengthen its strategies for the Rio 2016 Olympic Games and the new cycle that will begin after the games next year, with a view to Tokyo 2020.

Since its creation in 2009, CRESO has made great efforts to raise the athletic and academic conditions of the main Olympic athletes in the Dominican Republic.

CRESO in a non-profit entity that invests the sports development of high performance Dominican athletes accompanied by an academic training that seeks to trave s their investment in sports, promote leadership development and model citizens. The program is supported by nine companies that have joined in favor of Dominican sports and athletes. These CRESO partners include Central Romana, Claro, Ferquido, Banco Popular, Rica, Grupo SID, Universal, V Energy and VICINI.