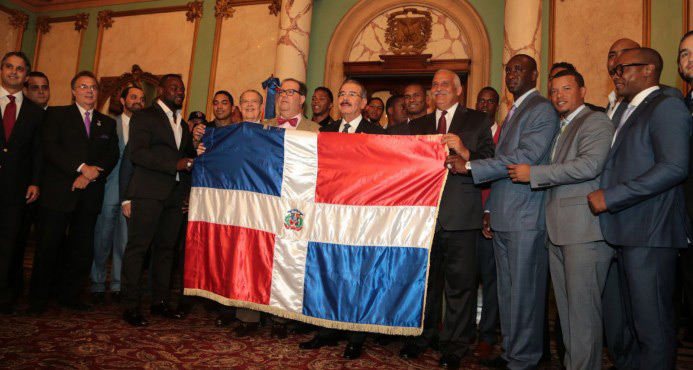 President Danilo Medina delivered the Dominican Flag on Friday to the Managing Committee of the Leones del Escogido, which will represent the country in the 2016 Caribbean Series.

“Let’s give the D.R. the 20th Championship Crown, and that’s where you come in. Don’t let it come to a tie. So congratulations and the best of luck!” said the President. He wished the national champions all the best, and expressed the great honor he felt by delivering them the flag that represents Dominicans, at the same time that he exhorted them to keep their national pride held high.

The Head of State delivered the flag to Luis Rojas, Escogido Manager, during a ceremony that was hosted in the Ambassadors Hall of the National Palace in the presence of presidential ministers, Gustavo Montalvo and José Ramón Peralta, and Sports Minister Jaime David Fernández Mirabal.

Prior to delivering the National Flag, Danilo Medina greeted each of the team players that will represent the nation in the upcoming Caribbean Series, which will take place on February 1st to the 7th in the Estadio Quisqueya, and will be dedicated to the baseball immortal, Juan Marichal. Upon the ceremony taking place, Leonardo Matos Berrido, president of the LIDOM, assured that the team “will give it a good fight at the Caribbean Series which opens in a few hours.”

“I have no doubt the team will champion over all the other teams and will earn the nation the crown once again”, Matos Berrido expressed. Meanwhile, businessman Felipe Vicini, chairman of the Escogido explained the reasons why the private sector has decided to invest in the Dominican sport. “We do it, because the players are role models to all modern-day youth, worth emulating. And so, this way we continue to make our country, as the LIDOM chairman said, a country brand.”

“This is the baseball capital. It is here, and we need to continue promoting that, because there’s always a lot of negative talk done abroad, but this nation has myriad positive values, and these players, these men here, are that insignia, and that’s why we support them,” Vicini emphasized.