“All sectors in the country have to work together.” 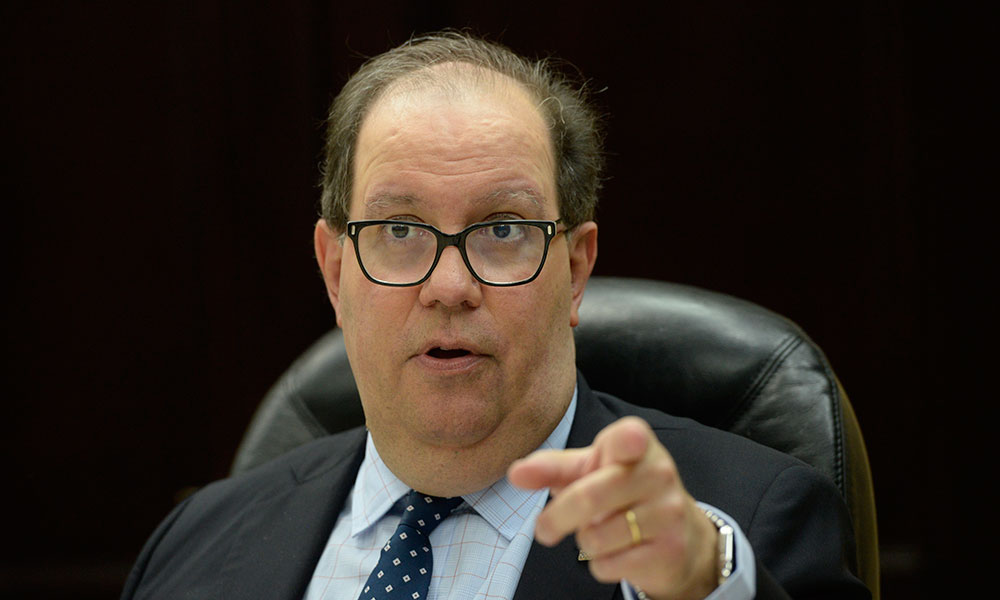 The businessman stated that it is vital to face the country’s challenges and suggested to support the government’s efforts.

Businessman Felipe Vicini Lluberes, chairman of Creando Sueños Olímpicos (CRESO) and managing partner of INICIA, a private asset management firm, emphasized yesterday the importance of maintaining unity among the various sectors that converge in Dominican society, in order to face the challenges of a country and a world that are increasingly changing.

“We have to be united, determine where to go and recognize the signs of what is happening in the world, not only in our country; we have to figure out where we are going”, he said during the Special Interview of El Caribe and CDN, during the Weekly Luncheon.

Felipe Vicini is aware that he does not have a crystal ball to see how the world will continue to move in the future, or what may or may not happen, but he is quite clear that the country has serious challenges that prompts us to  “take action”, rather than to be worried.

Using a ship as an example to portray the local reality, he warned that if the rudder is pulled to one side and someone else pulls it to the other, then an uncontrollable situation may arise. “We have to see how to collaborate with the government, because the truth is that no businessman here, nor any politician, nor any Dominican is interested in the government failing. Nor is it in their interest,” he said with certainty.

If a government fails in a country, he added, that failure is ultimately the failure of all the inhabitants of that country. “I believe that we should try to ensure that the government does not fail; we should always keep our eyes looking ahead…. To engage in dialogue, to try to see how we can help and where we are going,” he said. From his point of view, it is necessary to go slowly, but always taking steps forward, so as not to take two steps backwards. When the businessman gives these insights, he does so more specifically to refer to the decisions that are made and can be made in a context such as the current one, in which a pandemic is present, such as COVID-19.

“We must try to ensure that the recovery of the world economy goes well and does not overheat. We must avoid going back to what we went through a year and a half ago. It was a hard blow”, recalled Felipe Vicini, looking back to the first months after the beginning of the health crisis. By then – as of mid-March 2020 – the Dominican Republic had to shut down its land, air and sea borders to avoid an overflow of contagions and the collapse of the national healthcare system. Fortunately, the latter has not happened.

“The government has to do the right thing and we have to listen to it, as businessmen,” said the representative of INICIA, when asked about the recent announcement made by the Executive Branch that it will seek consensus among the various stakeholders in the country to prepare the ground for a tax reform.

The Executive Branch has given signals that it will seek to raise more resources, which are needed to meet commitments undertaken and debts incurred to fund, for example, pandemic relief programs, purchase of equipment and expendable material for hospitals and other components required to address a situation such as the one described above.

In fact, in the General Budget Bill for 2022, the authorities who “put the piece together” have indicated that the Dominican Republic has an ” imperative need” to increase the collection levels in the short and medium terms, with the purpose of investing in infrastructure projects, sanitation and environmental services, social inclusion, and other basic services demanded by the society. The Government is basing its rationale for the need to “look for more money” on the country’s low levels of taxation.

Between 2010-2021, the tax burden of 34 Organization for Economic Co-operation and Development (OECD) member countries averaged 41%, while 17 Latin American countries had an average tax burden of 23.9%, for a difference of 17.1 percentage points. In the particular case of the Dominican Republic, the average tax burden was 14.1%, surpassing only Costa Rica, which reported 13.6%, and Guatemala, which had a tax burden of 11.4% in the historical series in question.

A little bit of everything… What about social media?

The conversation with Felipe Vicini Lluberes was wide-ranging. He talked about sports -the main topic for which he was invited, in his capacity as chairman of CRESO-; he talked about cinema, a subject he is passionate about, and a little about economic aspects. He attended the meeting together with Manuel Luna, executive director of CRESO, and José Mármol, member of CRESO’s board.

Changing the focus of the conversation to respond to a question posed by Katherine Hernández, the CRESO chairman stated that “opening a communication platform where everyone can give their opinion is excellent, because it democratizes communication”. However, Felipe Vicini cited some aspects arising from this “democratization of communication” that have attracted the attention of experts in different disciplines and non-experts. It has to do with the fact that sometimes data and information are disseminated without being contrasted and that pose the risk, even, of attacking people’s morals, through defamation. It has been happening.

“In my opinion, you, as communicators have a certain code with which you operate, because you are an institution and there are things that surely you would not do,” he said, referring to the journalists who interviewed him and to the traditional media itself.

“But in social media (Internet), in which anyone participates, they are not bound to that.  I think that’s part of the ongoing challenge. A person who is saying something and has five or seven million followers should think about what he/she is saying, because he/she is affecting many,” he warned.

In the formal and traditional media, as in the case of El Caribe and CDN, information is verified, contrasted, questioned, and investigated. And additionally, it is prepared as a product, before giving it to the public and followers to consume, highlighted the INICIA businessman.

“In the case of social media, it is not the same. I think about something and I just post it right there, and sometimes without a filter. So, for me, that is one of the most important challenges of social media. And I know that many are also questioning that,” said the guest.

On Wednesday, the Association of Young Entrepreneurs (ANJE) presented the third edition of the study “Reflejo de la Inseguridad Ciudadana en el Clima de Negocios,” which states that insecurity is a threat to the growth of companies, thus putting the country at risk of being viewed negatively by investors. Felipe Vicini, when asked about this and the concerns it raises, replied: “Well, we are all concerned about insecurity, not only ANJE or businessmen. I think all of you are”.

He stated that what is important is to look for solutions, because if it is about concern, we are all concerned about the insecurity in the country.

“Criticizing is very easy, but looking for solutions is difficult. In the end, my question is whether this country is less safe than another country that is at our same level,” he said.

Tax reform and the revenue issue

Concerning the issue of an eventual tax reform, Felipe Vicini suggested that it is necessary to wait and see what the government comes up with. INICIA managing partner and CRESO chairman, responding to questions related to this issue, said that he prefers not to give his opinion on what should or should not be included in that reform or on what to eliminate or what to add, because that is not for him to say.

“In the end, it is a matter of budget, inputs and outputs.

So, we have to see what they are going to do. Obviously, we know that Dominicans have the need for a number of expenses and commitments. The question is how are we going to do it in the most efficient way so that the outputs and inputs match,” he said.

Tweets by @FelipeVicini
PrevPreviousFelipe Vicini he sees good future prospects for the DR; “we are beginning to see the light at the end of the tunnel.”
NextFelipe Vicini: we must lobby for baseball in Los AngelesNext
Scroll to Top